I’ve seen more results in less than a year of training with Shaun than at any other point in my life. His holistic and creative approach to designing workouts has allowed me to make consistent progress without ever feeling like I’m pushing myself too hard. His pinpointed technical feedback ensures that I perform each lift or exercise correctly, maximizing effectiveness while minimizing risk of injury. More importantly, Shaun has a passion for improving people’s lives that comes from a place of genuine empathy, and makes every session a joyful experience. I really can’t recommend him highly enough.

Shaun Fitzgerald is the “Ace of Trainers”! I should know as I have been one of his students for over a decade now. First off, his knowledge of the human body is encyclopedic. He seems to know the name and location of every bone, ligament, tendon, muscle, and most nerves which power our every movement. He also has a thorough understanding of how nutrition really works, including the digestive hormonal system (e.g. insulin, glucagon, etc) Shaun is the training/coaching business for all the right reasons. He is one of those few people who really gain their most satisfaction from the progress and overall well-being of each individual client. He’s transformed this one time, lazy, soft, 50-something year old, into the 66 year old block of granite I am today (Ok, I may be exaggerating a bit 😊 But seriously, with Shaun its not how big your muscles are, or how skinny your waiste is, or how many laps you can run. Its more about things like functional chains ie. Your muscle/skeletal system property working the way it was designed to. For example, can you pick up a bag of cement and carry it across the yard without pulling a muscle. Or worse yet, injurying your back? Another type of thing he likes to work on with old guys like me, is even the simple art of “balance”. As you get older the simple act of going down the stairscase two steps at a time is not the no brianer it was when you were 30. But, mature brains seem to be able to restore the balance/coordination factor if you practice it. I feel almost as agile as I ever was because of Shaun’s attention to it. And that makes a big different in living every day life. Anyway, we work on all kinds of crazy skills, strengths, flexibility routines. Shaun seems to have a repetiore of thousands of routines and excercies, many of which he invents himself. One day it may be doing top loaded squats for leg strength, and then throwing/catching a tennis ball at a concrete wall with one eye closed, and/or alternating your right/left hands to do it. Somehow it always seems to be something different. So I can sincerely only say, I fully recommend Shaun as the very best “Ace Trainer” around. I can say that because beyond being incredibly competent at his profession, Shaun truly cares for whats best for you, the client. 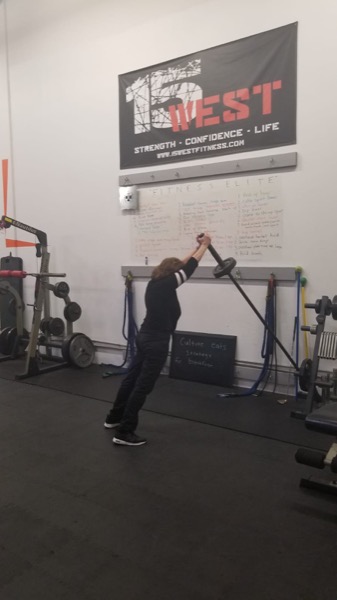 Shaun has an amazing knowledge and understanding of the human body. He took one look at me and knew what was wrong and how to work with me. Shaun works with the whole person: heart, spirit, and body. Because of Shaun, at 65 years old, I know my own body better than I ever have in my life. In less than a year, I have more strength and confidence and I am doing things that I never thought I could do.

When I turned 60 I began to feel old. I was becoming disabled and I was sick. Over the years, I had been slowing down and gaining a little weight here and there, but now it was accelerating and it really hit me like an avalanche. I felt tired all the time. Out of breath when I took a walk. I could not even bend over to tie my shoes. Worst of all, I had become borderline diabetic and I met the criteria for “metabolic syndrome”, both risk factors for developing more serious diseases in the coming years. I decided to do something about it and started working with Shaun Fitzgerald. I had worked with personal trainers before and I was expecting the to be brutalized with over-the-top workouts, but that is not what I found. For the first few months, Shaun had me working on balance, flexibility, posture, breathing techniques, stress management, and correcting imbalances in how my muscle groups worked (a concept I was entirely unfamiliar with). Years of working out on my own had resulted in severe imbalances between my anterior and posterior core groups (front and back of the body). This had resulted in my acquiring that “hunched over” look so characteristic of the elderly. After a few months, my posture was greatly improved and my shoulders were squared back to where they should be. This alone made me feel and look much healthier. We began working in core strength exercises, and only later did we start in on strength/resistance training and some cardio workouts. The months of gentle introductory work was what gave me back the ability to begin doing workouts I had been able to do years before. My workouts now focus on core, hip, and posterior chain strength: these are the areas in which the elderly lose strength, resulting in falls and disabilities as well as giving the elderly their characteristic “shuffling” way of walking. I did not want to end up with any of those! Because the workouts were not extremely taxing (at least not at first!) I have come to enjoy them and look forward to them. Aging is not a disease process. Being fit and healthy requires a bit more effort as we age, but it is worth it. As we age we do not have to become weak, disabled, or sick. We do not have to become obese and develop diabetes. I work out now because I am planning for the kind of old age I see for myself in the years to come: healthy, fit, and strong.

I have been training with Shaun for over 13 years. I am almost 66 years old, but with Shaun’s program, I feel like I’m turning back the hands of time every year. I play tennis on a team where most of my teammates are my daughter’s age and I am right at their level. I run around and keep up with my 3 grandkids, no aches and pains or sitting on the sidelines. With Shaun’s guidance you too can feel incredible and live such a full, happy, active lifestyle no matter your age! Trust me, I’m living proof. Make age just a silly number and get on board. 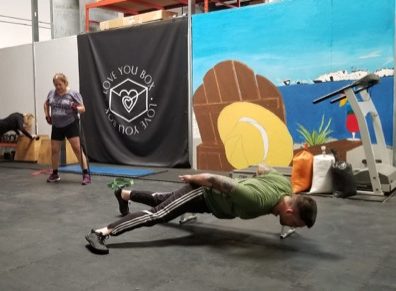 I started training with Shaun in October 2016. I was recovering from an ACL reconstruction surgery and was out of shape with a bad limp. I had gone to physical therapy for a few months, but I was still far from where I wanted to be physically. Right away, Shaun figured out what to do to get my whole body back in to working order and to take it to the next level. Now, I’m in better shape and move better than I did even before the surgery. Shaun has a unique and innate ability to identify and target dysfunction in the human body and then help his client overcome that dysfunction. I highly recommend training with Shaun if you want to push yourself and be in the best shape possible. Brazilian Jiu Jitsu Instructor 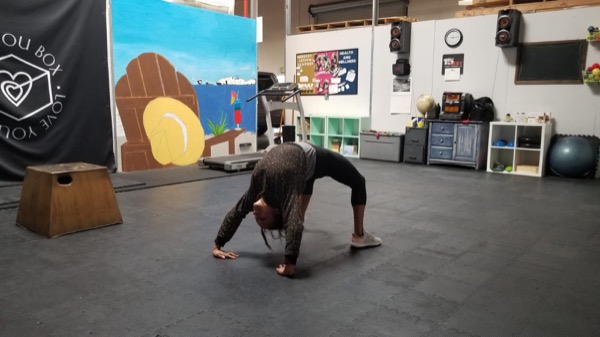 Shaun is a master of his craft. He is very knowledgeable in both health and fitness. He is the perfect combination between tough and kind. He pushes you with love. Every training session is creative, challenging, and fun.

Shaun is an amazing trainer who will not fail to impress you. He creatively combines his knowledge and love of exercise, nutrition, the body, and health, to create a full body workout that is new and fun every visit. At 45 years young, I am in the best shape of my life with a flawless squat thanks to Shaun’s focus on form, and his ability to communicate and teach how the body moves and how to engage the right muscles for any particular exercise. And what’s great, is he is a true believer in enjoying life. So, he has taught me tricks and tips so that I can enjoy my favorites of wine and pizza with no guilt. 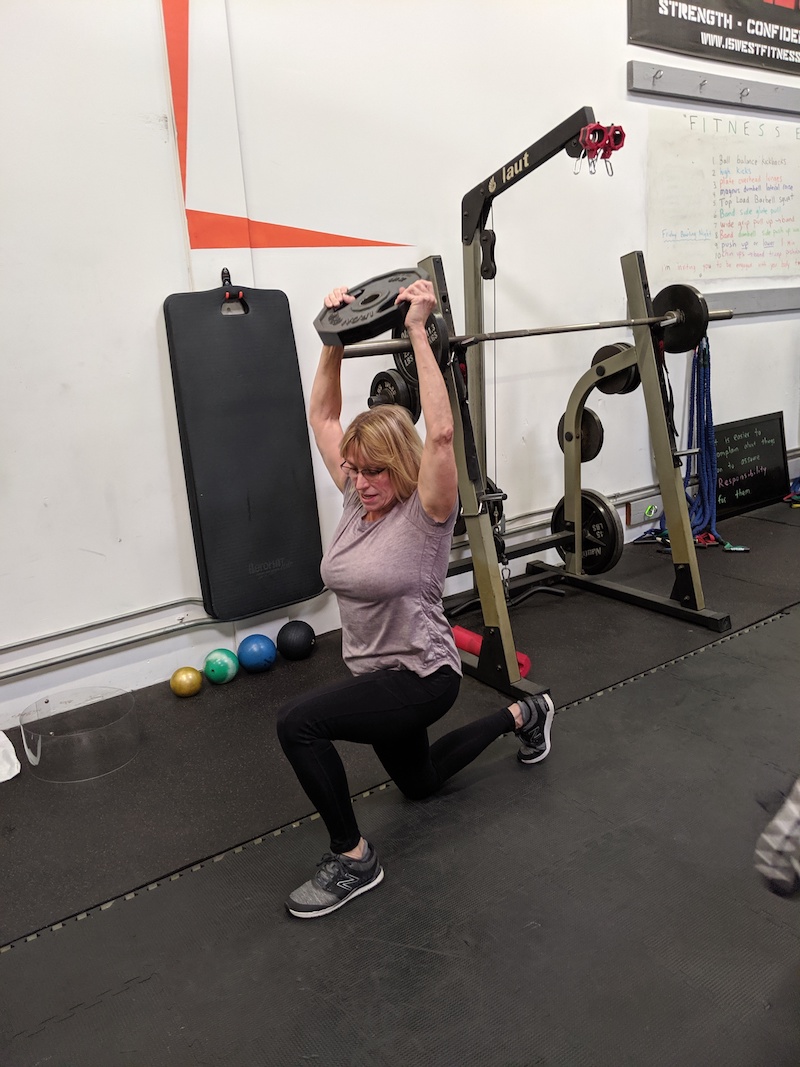 In 2006 at the tender age of 51 I had torn a hamstring and a few months later experienced ‘Frozen Shoulder’. I decided I would not ‘go gently into that good night’ and needed to battle my apparent oncoming demise. By the grace of God, I began working with Shaun. Well, 13 yrs. later I’m still at it. Shaun refuses to let age catch up with me. I am the beneficiary of his knowledge of Kinesiology and athletic training. He keeps it interesting & you won’t get bored!
If I did not have such an encouraging and knowledgeable coach I don’t know if I would have the wear with all to keep up the good fight.
A couple of years after I began attending the group classes I FINALLY convinced my husband to go with me. He had been working out at our home gym doing the same monotonous routine over & over ‘cause he didn’t like ‘public Gyms’. He has a family history of tight ‘bad’ backs. Lucky for him he has a brother that’s a Chiropractor who has straightened him up on more than 1 occasion when his back went out. He couldn’t even touch his toes! It only took 1 class to get him hooked. 8 yrs. later he’s still at it! He no longer has a problem touching his toes, squatting low, or stretching his psoas. Don’t know what or where the psoas is? Set up a session with Shaun & you’ll find out & so much more!
We also have a weekly semi-private lesson where specific ‘issues’ are addressed. Sometimes a bit of rehab, evaluation & general status taking so we know what to focus on during our self-care at home. Shaun constantly educates himself & keeps up on the latest trends & break throughs. It’s his passion & he takes great delight in sharing his knowledge & seeing his clients benefit. Don’t miss this opportunity to invest in your health & establish a sense of well-being. 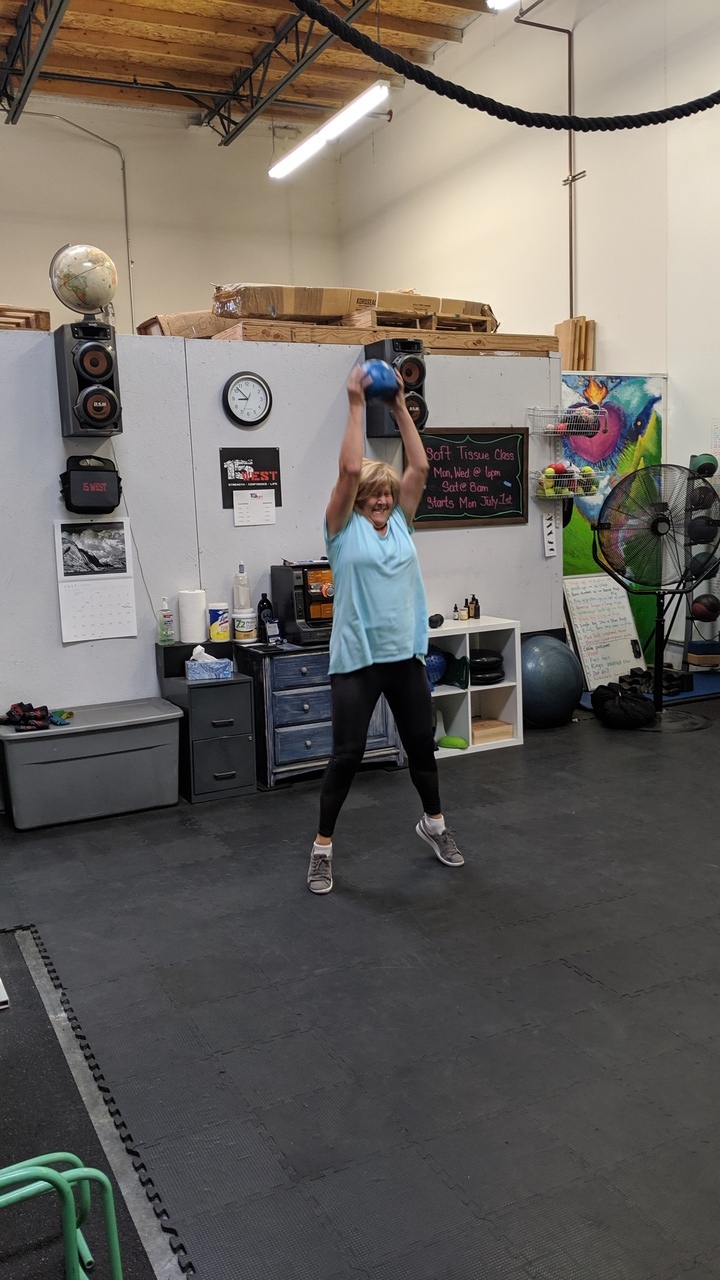 I am a 66 year old female, who has had a busy life yet I have neglected my body for most of my life. I have no body issues that require surgery, yet my body is aging and I am loosing ground.  I came to Shaun desiring help with balance and strength. His work with me has exceeded my expectations by light years. Shaun has gently and graciously taught me about my body (as he is extremely knowledgeable in anatomy and physiology) as well as regularly encouraged me to push and continue with training even when it was hard, painful, and sometimes discouraging. I have learned so much in my 8 months with him. I have also grown in balance and strength, and I have begun to get this mostly sedentary body moving in a way that will benefit me the rest of my life. Shaun is an upbeat, faithful, well educated trainer who knows his stuff and can translate that information to anyone who is willing to learn. The term trainer just cannot describe Shaun accurately. You must add the adjectives: masseuse, physical therapist, nutritionist, and encourager to begin to adequately describe Shaun’s training and expertise. I highly recommend him to anyone on the spectrum of life, from my place at 66 to high school athletes, to those who sit for a living, as well as Spartan racers.. Warm Regards,